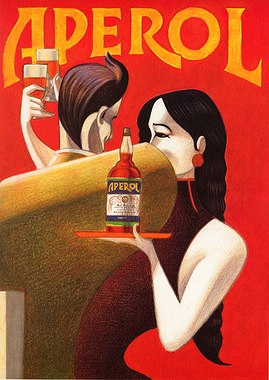 Thanks to Cocinalia for this great idea: creating just for one day (today: 11 december) and through all of our food blogs, one big fat gastronomy museum! I love it, I really do!

Well, for once I’ll keep it italian, presenting for those – but I’m suppose they’re few – who do not know Lorenzo Mattotti my absolutely favourite italian contemporary artist. To be very honest with you: Mattotti has not much to do with food&wine, a part from the Aperol campagn that he brilliantly ilustrated. Well, he also did a McDonald campaign but, ehm, well that’s not really the kind of product we would talk about, wouldn’t we? Anyway, Aperol is a light alcoholic drink people use to drink as aperitivo, taste is of the bitter kind, giusta as for Campari, Crodini & co)

Just as for Bacon, Munch or Chagall, Mattotti’s drawnings are very recognizeble: coulours that are full of light, ‘fat’ figures, whithout outlines, that often get close to expressionism, sometimes even surrealistic or abstract. The bodies seem to float and exclusively made of curves. Mattotti is also very good at capturing the right moment, just as a fotograf would, the one in which the subjest’s concentration in expression is at it’s utmost. Lorenzo Mattotti was born in 1954. After studying architecture, he decided to devote himself to comics and is recognised today as one of the most outstanding international exponents of the art. His works has been published in the most important magazines and his books are translated all over the world. Mattotti’s work has evolved with a continuing coherence, though always within the eclectic tradition of those who have the courage to be innovative. For children he has illustrated “Pinocchio” by Collodi and “The Pavilion on the Links” by Stevenson. Mattotti has also worked in the fashion world, reinterpreting the models of the most famous fashion designers for “Vanity” magazine. He has carried out advertising campaigns and has illustrated the cover of such magazines as The New Yorker, Le Monde and Suddeutsche Zeitung. He realized also many important posters: Cannes 2000 – “Lire en Fête” “La Marie de Paris”, Estate Romana ecc. Recently, for the Film “Eros” of Wong Kar Way – Soderbergh et Antonioni, he created the segments within the three episodes.